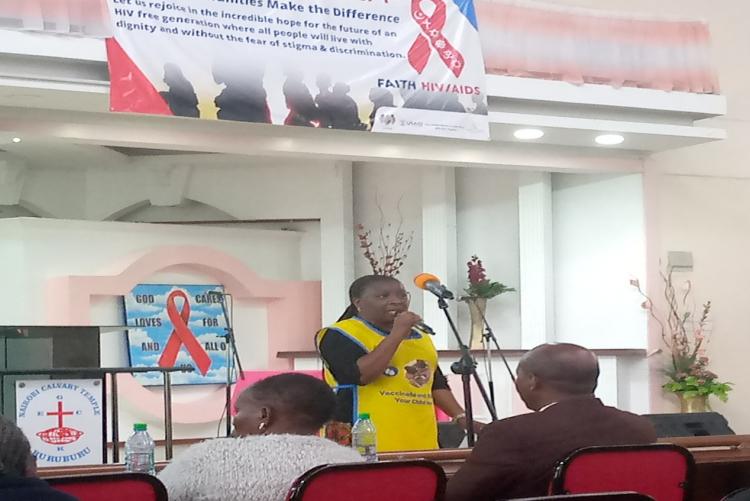 World AIDs Day is a global event marked on the 1st of December each year. The occasion is held in support of People Living with HIV/AIDs, to commemorate those who have passed on due to HIV/AIDs related causes as well as celebrating the success and advancements made in the last decades in the prevention/management of HIV. This year’s World AIDs day celebrations which were themed ‘Communities makes a difference’ was an opportunity to recognize the essential role that communities have played and continued playing in the HIV/AIDs response at national and local levels

KAVI- Institute of Clinical research KNH site staff joined this year’s World AIDs Day commemoration which was held in Nairobi County at the Nairobi Calvary Temple Church in Kiambio. The occasion was graced by the Nairobi County Director of Health Dr Lucina Oyoo, and the National Council of Churches Chairperson Reverend Canon Rosemary Mbogo who is also a member of the National AIDs Control Council (NACC). While welcoming the guests to the function, the Host, Rev Jane Ng’ang'a  hailed the efforts made in the ongoing struggle to prevent HIV related deaths that had seen the HIV prevalence drop from 6% in 2015 to 4.5% in 2018. She pointed out that there was a need to show support and affection to those infected and affected by the HIV pandemic as this was a reflection of God’s word.

The County Director in her keynote address pointed out that Nairobi County government was committed to achieving the 90:90:90 targets set by the WHO. She informed the participants that the county had achieved over 90% coverage in HIV testing among its residents but was still below target at ensuring 90% ART coverage among those infected(currently at 79%). She hailed the community organizations, Community health volunteers who have been key in supporting PLWHA in the communities as well as providing linkage between health facilities and individuals.  She also recognized the role of the faith sector in supporting efforts to reduce stigma and discrimination among PLWHA as well as supporting other health activities in the County. Dr Oyoo affirmed that the County government was committed to ensuring inclusivity and collaboration in all health programs as it embraces the Universal health coverage system.

One of the highlights of the event was the launch of the  ‘Faith Sector –HIV and Health Messages ‘ that was led by the Right Reverend Canon Rosemary Mbogo- The Chairperson of The National Council of  Churches and a Member of  NACC.

During the occasion, health checkup for high blood pressure and diabetes was provided as well as screening for cervical cancer and HIV. Participants were also provided with information on the HIV self-testing as well as being provided with free HIV self-tests kits (ORAQUICK AND INSTI). Over 400 people were tested for HIV as part of the day’s activities.

Some of KAVI-ICR Collaborating partner’s particular the Gospel Parliament whose members are represented in the NACC Faith Sector working Group also posted the launch of the Faith Sector manual which was a key highlight In this year’s World AIDs Day celebrations countrywide, including the national event which was held in Kisii County.

© University of Nairobi 2021.  All rights Reserved.